Here we present the models of classical guitar that we make at Guitars Bros, all the guitars presented here are handcrafted from start to finish, with the old traditional system of the construction of the Spanish guitar . The classical guitar is a plucked string musical instrument, made up of a wooden box, a neck on which the fingerboard or fretboard is attached, generally with an acoustic hole (mouth) in the center of the top and six strings. The frets are embedded on the fingerboard, which allow the different tones. At Bros guitars we count and classify the guitars based on the materials and different characteristics, as well as the sound of each of our guitars.

The development of the modern classical guitar is a centuries-long story with much debated origins. Within this cultural melting pot, Spain has played the most significant role in bringing us the refined guitars of today, so manufacturers using traditional methods can call them truly ‘Spanish’. The design ingenuity of the 19th-century Spanish luthier, Antonio de Torres, advanced a construction formula that refined the sound, adding power and stability to the instruments. The sublime playing of Francisco Tarrega and later Andres Segovia were notable catalysts for continued design creativity and for spreading their popularity. Today, guitars built with a ‘Spanish heel and foot’ to integrate the neck and body, fan bracing to support the soundboard, with a subtly domed top for greater projection, are what distinguish the Spanish classical guitar.

All of our classical guitars are handmade using traditional Spanish guitar-making techniques with carefully selected woods. We build models with the option of a cutaway, and we also accept commissions for totally individually designed guitars. 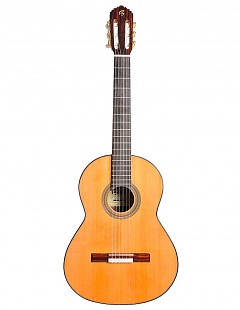 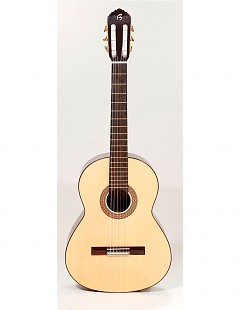